Sonoma Valley Hospital is a community hospital in the true sense of the word. It was created by the community and has served residents of the Sonoma Valley in its current location since 1957. 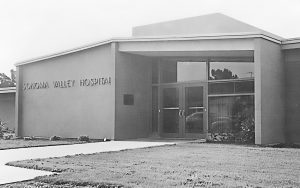 These photographs show the hospital right after it opened on the Andrieux Street in January 1957 with 35 acute care beds. This original structure remains today although surrounded by later additions.

The hospital has undergone several major renovations and expansions, including the recent addition of a new wing housing a modern Emergency Department and state-of-the-art Surgery Center. Here is an overview of the hospital’s history and we offer special thanks to Bill Lynch and the Sonoma Index Tribune for providing a great deal of the historical information.

In the early 1920s, Sonoma had three local doctors, but no real hospital. There was a care facility called the Crane Sanitarium in the Boyes Hot Springs, but that burned down in the devastating fire that consumed the Springs in 1923.

In 1924, a newcomer to Sonoma, Dr. A.K. McGrath, along with other local doctors, persuaded Mr. and Mrs. George Burns to put a couple of beds in their home on Burndale Road for maternity cases. Mrs. Burns, who was known by locals as “Aunty Jo,” had been a nurse at the Crane Sanitarium.

Eventually more beds were added and Burndale Hospital, as it was called, continued in operation for more than 20 years. When Aunty Jo turned 80, she turned management over to Dr. McGrath and two newer doctors, William Newman and Carroll Andrews.

By 1945, the group had raised enough money to lease, remodel and occupy a two-story building (now Bartholomew Estate Winery) owned by Frank Bartholomew, who also owned Buena Vista Winery. The building, in an earlier life, had been a state institution for delinquent women.

During its first two years, with 21 beds and room rates that ranged from $6 to $9 per day, the new local hospital made a profit of $15,000. The hospital’s first board of directors included, Dr. Andrews, Paul Wolter, A.B. Grinstead, August Pinelli, August Sebastiani, Mike Mulas, C.A. Wilson, A.L. Rathbone, Helen Dresel and Sam Shainsky.

Grinstead, a local attorney, was also instrumental in drafting and helping pass the first statewide District Hospital Law in 1945 that allowed district hospitals the same powers to levy taxes as taxing districts and stipulated five-member boards of directors. The passing of the law was followed in 1946 by a successful local election that year to establish the Sonoma Valley Hospital District. The first directors of the District board were four members of the Bartholomew Hospital board, Wilson, Pinelli, Shainsky, and Sebastiani and a new member, Marion Green.

Final Location, 347 Andrieux Street
By 1952, the hospital’s small capacity and remote location prompted the board to appoint a committee to search for another site. The committee and the board quickly settled on a parcel of land near downtown Sonoma on Andrieux Street which was donated to the District by August and Sylvia Sebastiani. The cost to build a 35-bed acute care hospital was estimated at $400,000. As the District already had reserves of $164,000, the board, in August 1953 held a bond election for $300,000. A majority of the Sonomans voted “yes,” but the measure failed to get the two-thirds majority required for a bond.

A second study committee was commissioned and, after more research, concluded that the Andrieux site was still the best. A second bond election was held in February 1954, for $262,000. An all-out community campaign was launched and with virtually every business and civic leader behind it, the measure passed by a six-to-one margin.

The bid for construction came in at $395,426. Groundbreaking took place on May 20, 1955, and the new hospital with 35 beds opened in January 1957 with a big open house party. In 1967, some parts of this facility were remodeled and the bed capacity increased to 49. The unique interior courtyards and the big Chinese Elm date from this remodel.

In 1970, local voters approved a $1.79 million bond to increase the size of the hospital and the three-story West Wing was opened in 1972, increasing the hospital’s capacity to 89 beds. Problems with the new wing surfaced in 1977 when it was discovered that the structural design was flawed. The District, with the help of local attorney, Gerry Hill, sued the structural engineering firm that had designed the building and, as part of the settlement, the East Wing was constructed to allow the hospital to continue to function while the West Wing was retrofitted. After the work on the West Wing was completed, the East Wing, although originally designed and built as a “temporary” structure as required by the settlement (it was wood not cement block), was converted to serve as a Skilled Nursing Facility. The total project was not completed until 1992. The East Wing continues to house the hospital’s foodservice operation.

The Challenge of Sustaining the Hospital
After the 1971 San Fernando earthquake, the California State Legislature passed the Alquist legislation in 1972 that established the Office of Statewide Health Planning and Development (OSHPD) and required all hospitals in California to meet new seismic safety codes by the end of 2008 or face closure. After the 1989 Loma-Prieta earthquake, OSHPD tightened these seismic requirements and extended the compliance deadline to 2013 under certain conditions. For Sonoma Valley Hospital these requirements posed a significant problem. While the hospital buildings were not in danger of collapsing during an earthquake, they did not meet the “continued operation” criteria of the Act. The “temporary” East Wing met the code but could not continue to function without the Central Wing and the three-story West Wing which did not.

In addition, the Central Wing, where surgery, the emergency department and other critical care functions of the hospital were located, was far from adequate. Designed for the medical practices of the mid-twentieth century, it was inefficient, costly to operate and had a central utility plant that was beyond its useful life. The hospital was also losing money, partially as a result of the bankruptcy of the Health Plan of the Redwoods in the early 1990s. It was for these reasons that efforts were initiated to improve the hospital’s financial position and to seek a long-term solution for the facility.

After countless committee meetings and fact-finding presentations that failed to reach a consensus, a parcel tax was proposed in 2002 to sustain the hospital while solutions to the earthquake problems were sought. It was passed overwhelmingly by the voters. But the parcel tax did nothing to address the inefficiencies of the hospital’s half-century-old central core and the operating inefficiencies.

After more years of study, in 2006 a $148 million general obligation bond was proposed to build a new hospital on a site owned by the Leveroni family. The measure proved extremely controversial and unpopular, in part because acquiring the proposed property required eminent domain proceedings, and the measure was rejected by the voters.

Later in 2006, with the seismic code compliance deadline of 2013 looming, a citizens group (the “Plan B Committee”) led by Norman Gilroy and Peter Hayward was formed to determine if a consensus could be reached that would be supported by the voters.

Subsequently, the Board proposed a parcel tax extension to keep the hospital afloat while an alternate solution for the seismic problem was sought. It passed by a significant margin.

Despite the controversy over solutions, there was general agreement that the central utility plant, the surgery center and the emergency department needed replacement. In April, 2008, following more community-based studies, a $45 million bond to replace the oldest portions of the facility was put before the voters. It needed a two-thirds approval, but fell short on a 61.8% percent “yes” vote to 38.2% “no” vote.

The Hospital Reborn
As they had done in 1953, the District sharpened its pencils and, in November 2008, Measure P asked the community to authorize $35 million in general obligation bonds to make improvements to the existing site. The bonds were to be used to replace the central utility plant, to develop a plan to upgrade the existing acute care facilities, and to retire $4 million in outstanding debt. The measure passed with a better than four-to-one vote.

Over the next four years, supported by a successful $11 million capital campaign, the modernization project grew to include the construction of a new wing housing a modern emergency department and surgery center, as well as the replacement of the entire central utility plant. The new wing went on display to the public with an open house party in late 2013, and opened for use in February 2014. Since opening, the emergency department has seen a significant increase in visits.

In recent years, the hospital has seen continued facility upgrades and the addition of new surgery and diagnostic equipment, much of which has been funded by donations made through the Sonoma Valley Hospital Foundation. Today, Sonoma Valley Hospital is a modern community hospital providing most of the services needed by Sonoma Valley residents in an up-to-date facility. In early 2018, the hospital formed an affiliation with UCSF Health, the top-ranked medical center in California and one of the top five hospitals in the nation, which strengthens its ability to serve the community.